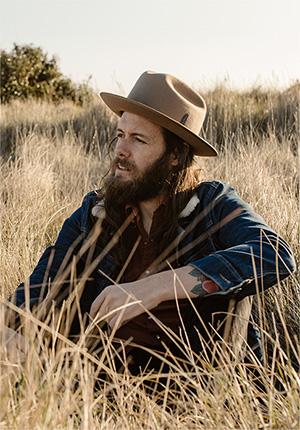 Folk singer-songwriter Steve Wallis was raised in Byron Bay, Australia, but after spending more than a decade playing in bands around the country, he relocated to Paris, France in 2014.  Steve Wallis writes vital, clear eyed folk songs, driven by his shrewd fingerpicked guitar, and a disarming mix of wry wit, potent honesty and bittersweet sadness in his writing that recalls Townes Van Zandt, John Prine, or Justin Townes Earle.

Steve performs solo, telling stories and singing songs, with his little Guild guitar, his harmonicas and his voice slipping between delicacy and gruff candour, the perfect vehicle to traverse the timeless and ever-potent topics of new loves, lost loves, old homes, old friends.

His debut solo album ‘Nothing Stays The Same Way For Long’ releases September 16 2022.

Since the release of Melbourne Rain, Steve’s most popular release to date, he has been performing around Europe, but it was in upstate New York, at a writing retreat hosted by folk duo The Milk Carton Kids, that Steve met English songwriter/producer/multi-instrumentalist Joe Boon, and the pair began working on demos that would form the foundation of his first full-length LP Nothing Stays The Same Way For Long.

Recording plans were inevitably put on hold throughout 2020 until late 2021 when Steve travelled to North Devon, England and the pair spent six weeks recording the album. Much was recorded in Joe’s small project studio, as well as in three local churches who donated their reverb to create swathes of room-filling drums and elegiac piano. The closing, and title track, was recorded live in a small church in Georgeham. The pair recorded almost everything between them, trading the roles of engineer and musician, and were joined on several tracks for harmonies sung by Bryony Lewis and Kara McKee. A few final pieces were delivered from a distance: saxophones by Bruce King; pedal steel by Jon Graboff; pump organ by Dan Walker and fiddle by MorganEve Swain. Joe mixed it, and it was mastered by Doug Van Sloun in Omaha, Nebraska.

Throughout the raw and stripped back directness of The Wolf; to the sprawling walls of vocals, drums, slide guitars and mellotron on Now I Don’t and the hymn-like stillness of Nothing Stays The Same Way For Long, Steve’s aching voice and stirring lyricism punch through. In the final track, Steve reflects on fleeting times far away in the Catskill Mountains: “I found a piece of heaven and I wrapped it in a cloth”. He has done something similar with this LP. It too may be fleeting, but it’s worth holding on to in these strange times.

“There’s a joy buried in the heady loam of the heartache, on Steve Wallis‘ debut that, while he may be a largely unknown name, for now, will undoubtedly ensure he doesn’t stay that way for long.” – Folk Radio UK
“Make no mistake, this album heralds the arrival of a very significant talent, and one who deserves to find his record lauded alongside the greats of the genre” – Americana UK
Wird ein schöner Abend im Tik !!!
THURSDAY SOUNDS: – Singer/Songwriter Konzerte im Tik, ab 21.00 Uhr
Jeden Donnerstag ein Konzert mit einem Singer/Songwriter oder einer kleinen Band.
Wer aufmerksam durch Berlin stolpert hat es mitbekommen, die Stadt ist ein Magnet für junge, verrückte, talentierte und interessante Musiker. Mit etwas Glück sieht man auf der Warschauer Brücke oder in einem Kneipenhinterzimmer an einem Abend mehr Talent als das ganze Jahr im Fernsehen.
Wir wollen diesen Musikern eine Bühne geben.
THURSDAY SOUNDS:
Every Thursday we have a concert with a Singer/Songwriter or a small band.
It’s Berlin nowadays: The City has become a magnet to musicians from all over the world or from just around the corner. Creatvity and talent is on the street playing for small change, on the stages of open mics or maybe in the bar in your street.
The Tik has a stage for these musicians, every thursday.
+ Google Kalender+ Zu iCalendar hinzufügen

Rigaer Straße 7710247 Berlin
www.theater-im-kino.de
We use cookies on our website to give you the most relevant experience by remembering your preferences and repeat visits. By clicking “Accept All”, you consent to the use of ALL the cookies. However, you may visit "Cookie Settings" to provide a controlled consent.
Cookie SettingsAccept All
Manage consent

This website uses cookies to improve your experience while you navigate through the website. Out of these, the cookies that are categorized as necessary are stored on your browser as they are essential for the working of basic functionalities of the website. We also use third-party cookies that help us analyze and understand how you use this website. These cookies will be stored in your browser only with your consent. You also have the option to opt-out of these cookies. But opting out of some of these cookies may affect your browsing experience.
Necessary immer aktiv
Necessary cookies are absolutely essential for the website to function properly. These cookies ensure basic functionalities and security features of the website, anonymously.
Functional
Functional cookies help to perform certain functionalities like sharing the content of the website on social media platforms, collect feedbacks, and other third-party features.
Performance
Performance cookies are used to understand and analyze the key performance indexes of the website which helps in delivering a better user experience for the visitors.
Analytics
Analytical cookies are used to understand how visitors interact with the website. These cookies help provide information on metrics the number of visitors, bounce rate, traffic source, etc.
Advertisement
Advertisement cookies are used to provide visitors with relevant ads and marketing campaigns. These cookies track visitors across websites and collect information to provide customized ads.
Others
Other uncategorized cookies are those that are being analyzed and have not been classified into a category as yet.
SPEICHERN & AKZEPTIEREN